The Climate Change story in one image

januar 17, 2017
The online climate change debate is an exhausting place to navigate: From doomsday-preppers to conservative-ostriches all fighting for a few seconds of attention. Here is my contribution to global warming today:

The climate change story in one image 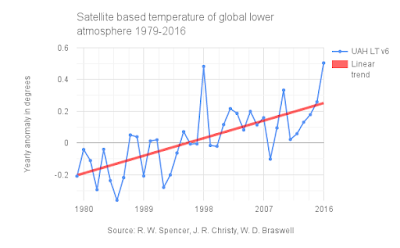 In this post I thought I'd just look at the power of data visualisation in telling the story about global warming, or trying to obfuscate that story with exactly the same data. I made the above chart using the same dataset as the below chart which is a visualisation of global temperature data often linked to by skeptics. These charts are created from the exact same published data set called UAH LT v6 (See bottom of post for additional details).


In the context of the climate change skeptic viewpoint I have often seen this chart used to flag that 2016 is within statistical margin of error no warmer than 1998 and that December 2016 was cold and thus "There is no warming trend!"

While the chart shows the published data it uses at least these methods to obfuscate the Global Warming trend in the data:
The author of the noisy chart is the co-author of the actual dataset, yet his University presents the very same data with a clear visual emphasis on the increasing trend using a different chart:

Climate change is the story of the year
For me the climate change theme provides an abundance of interesting and challenging topics to explore: How to use data visualisations to tell the climate story, citizen science projects contributing data, the challenge of linking global policy with everyones daily life, how to handle impossible So-Me discussions and much more ...