I have been experimenting with data logging on Pachube and the concept of the "familiar stranger" (people you coincidentally create social networks with due to same habits or routines). I believe there is a big potential for interesting analytical use of the data.
This morning I logged my surroundings going from home to work. The thumbnails show two graphs, one for new strangers (top)  and one for familiar strangers (bottom). In this case "familiar" is concidered to be people that have been around for more than one minute.
Overlaying the two graphs I'll try to explain what caused the fluctuations in the data. 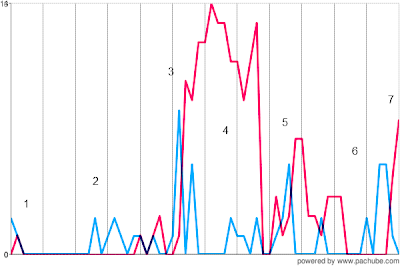 Vertical lines are five minutes apart, blue is for strangers and red is for familiar strangers.
I find it interesting to see how the blue spikes on some occations are followed by a longer red surge and sometimes not. This tells me, just from the data that some occations you move past people and sometimes you stay with them. Which is what you would expect!
Concept Development Interaction Design Mobile Pachube Processing Technology Visual Communication