januar 08, 2009
Just before christmas i read an interesting article in NewScientist, by Gaia Vince on people going off the grid. Off-grid is in this context disconnecting from the various public supplies people depend on for their daily life at home: Electricity, gas, sewage and water. In the US there are 200000 off the grid, in the UK there are 40000 living mostly self-sufficient.

Even though the climate issue is a driving force for people going off the grid there is also the satisfaction of being self-sufficient, reducing the cost and the security in being independent. And in Tony Marmont's (UK) case, who has invested £2 million in being self-sufficient, price is no object when becoming one of the first to own his own hydrogen production facilities to store renewable enrgy for future use.

At this point in time the marmont case is a good example of why not all of us is becoming our own energy producers; it's expensive and requiers a lot of equipment.

Gaia presents the reader with a list of steps to take to go off-grid.

The above list is quite interesting and until step four they are within reach for many homes. The last step, storing ecsess energy for night, winter and other times when generators does not deliver, is still out of reach for most homes as the technologies are big, bulky and expensive.

Hydrogen is touted by various sources to be the future solution to distributed energy production and the medum of choice to store ecsess renewable energy. Hydrogen can be used directly as fuel in fuelcells for chemical conversion into electricity. I'll get back to that in a future post. Sadly, converting homemade electricity into hydrogen and back to electricity is quite costly at the moment for the regular citizen.

Consumption
The article also presented an chart of what we use electricity for in homes. I found it intriguing that the most visible use of energy, lights (Orange), only accounts for roughly 10% of total use. 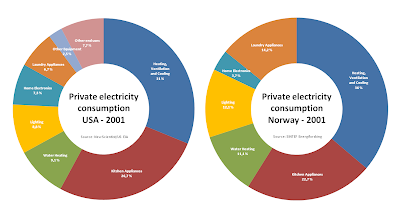 I added the norwegian consumption for comaparison. There is quite a big rally for replacing the normal incandescent bulb with the more energy efficient CFL, but that would only dent total energy consumption. More interesting is the big chunk going into kitchen appliances (Red), that the use in the kitchen compares to general heating/cooling (Blue) was a suprise for me. A thought i got was what if you reduce total consumption, excluding lighting, by 10% and then double the amount of lights, you would have perceptually increased energy use by 100% but still be at status quo in total energy use.