mars 04, 2009
Energy Monitoring
The more I dig into this material, the more I find people and companies that are developing ideas on energy managment. Living in Norway and looking into this field has some disadvantages: Awareness to energy consumption and systems to increase awareness are almost non existing. Utilities stopped charging for over use and peak consumption a long time ago and since then people have had few incentives for tracking those parameters. Regulations, such as mandatory smart meter installations, are very important for change on a big scale in energy infrastructure at the moment. The previous post targeted independent initiatives to enable people to track their energy consumption and the reduce bill or carbon footprint. Barack Obama throwing money at energy initiatives these days could account for some of google's interest. I conducted a search mission for the energy companies endeavours in the home monitoring market:

Energy Dashboards
The utilities that either have automatic meter readings and many that does not (requires manual readings) have fallen in love with various forms of energy dashboards. Some are real and some are just available as future concepts. Finding the utilities energy dashboards are somewhat difficult, they usually reserve their dashboard for local customers (but might have a video of it) and the independent ones requires that you buy some equipment for it to work.

This is my dashboard. They have some additional functions like comparing consumption to previous years and projected cost etc., but the graphing of actual consumption (manually entered) is the most interesting. As you can see there is a sudden spike, but that is another story. As this is my primary experience with energy dashboards I think we have a long way to go. It has far too little detail, which is not surprising as manual reporting is only required 6 times a year. Anything in between or a missing report is guesstimated. Without real time, frequent and detailed reports it has little value for me. I think I can imagine my consumption graphed over a few data points without this dashboard.

BTW: Received an email seconds ago from them plotting their status on smart metering: They offer a smart meter reading values by the hour (still not real time!). By 2013 all customers on their grid will have those, but for now I would have to pay 2500 NOK (279,36 €) to have it today.

Växsjö Energi
Watching this video suggests that not more than consumption over time is presented. There was some mention of a community competition, but not much on how it was carried out. 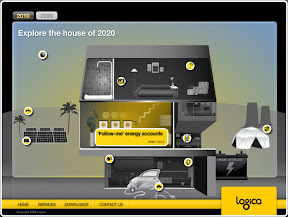 Logica talks a lot of smart grid and it's benefits, but it is hard to track down any thing other than written material on their site.They do reference Växsjö mentioned above.

This nice presentation of their visions and ideas for possible uses in the near and distant future is worth a watch! Examples are "Mobile Smart Metering display" (possible a mobile application), "Follow me" energy billing (all types of energy is paid for and managed by same service) 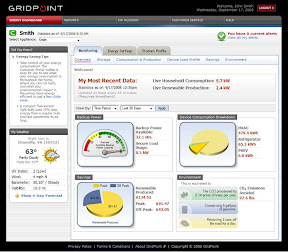 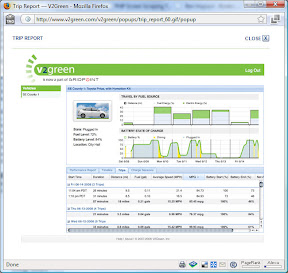 This company seems to be very streamlined for operation in the smart grid market. They have several products on the market and they have a strong focus on the user experience. Though it is not that available at their site either, this company give at least a few glimpses on state of the art "energy dashboards".
It looks to me that their core business is to sell big battery packs to store energy that can be released at peak consumption to balance grid load better. But then they built the smart grid services into and on top of that to extend their reach and value for customers. Smart move? More on the smart grid with nice graphics here (flash) and examples of dashboard use here (wmv) and here (wmv). As a first that I have seen they include electric vehicles in their grid with their own dashboards and services. The car as a key to home production of energy (Hydrogen economy anyone?) seems ever closer.

Even more dashboards from Cnet.

What did I find?
These added values to the energy services offered are not that easy to verify without actual testing. One thing that can be observed is that they are visual representations of consumption and production that is left to the consumer to act upon. From an Interaction Design perspective they look much similar to performance monitors on PC's and their peers. At most the companies suggest they can compare various parameters against peers in a community, but imagination seems to end there. Imagination not at work at GE.

I am stuck with a feeling that we need to ask; what now/then? When everything is connected, measured and shared, what do we have? Pachube vocally leaves that open to the user of their API, but these questions does not seem to be asked or answered by the key players in the field.