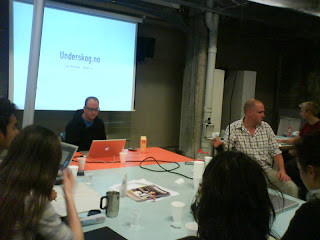 Even Westwang talking:
underskog.no is a service for sharing whats on in Oslo, entered by members of the site. The idea is to catch the not so well known events so more people get access to them.
The page has a relative low member count, and many users know each other. The frontpage is very long and serves a calendar and news section that is very detailed. But it can be filtered into more "relevant" content.
They have no capacity for pictures so they tie in flickr accounts automatically.
Meant only for one city (Oslo), but peoples creativity expanded it to not so related places, and the site has to expand, eventually, to other towns.
The comments functionallity has been a hit. And by encouraging this by added functionality the discussions has grown enormously (4K commensts etc.)
They have focused on how people can be positive. I.e. the problem of getting people to behave. They enable people only to be positive be not having functionallity to be negative (i.e. thumbs down). The positive remarks are made to be personal by adding your name to the "kudos". Of 300000 comments only 12-13 had to be moderated away due to offensive content.
Also since the site is invite only, people feel responsible and don't behave badly since that would reflect on their friends.
The Making of:
3 people, 1 month to 1.0, continual development until 2.0.
The key was to start with the minimal system to fulfill their vision. Then add to that. Now, when they have time, the development is much more complex and difficult to implement.
The software is an ergonimic machine. When things don't work the users complain on the same issues. Like a broken chair. So now when the complaints sections is empty, they feel the site is finalized.
In the start the weblog was silent, people did not want to speak to everyone at once. The key was to have people talk to their friends in the beginning. And instead of having just one weblog there was forums for different topics.
So now there has been 26000000 internal hits.
The social filtering is based on what your firends are doing and that is filtered to your calendar.
Showing graphs based on acticites are quite interesting and shows seasonal patterns and how things affect the service. An example, the introduction of facebook is visible as less usage in that period.
The site is not supported by ads, and has no goal of making money. Based on "dugnad". Some investments in hardware and free hosting is helpful.
When a site grows you need to get around the noise the users generate. And since underskog has a well defined center it would be difficult to expand to millions of user since the noise would make the core service dissappear. (The calendar of whats on each day).
Interaction Design Notes